Tales from the Archive: Frisner’s Souvenir

We weren’t the kind of people who stressed over holiday gifts. Frisner had come up out of a struggling community—he literally slept on a dirt floor as a child. I had developed an aversion to the annual shopping mania, and, as a graduate student, my means were limited anyway. As we approached the finish line for 1987, I counted five years almost to the day with the maestro, and we celebrated only joudlan (New Year’s Day, also Haiti’s Independence Day). We did it the traditional Haitian way, with a ben chans (herbal luck bath) on New Year’s Eve and a nice, steaming kettle of soup joumou (squash soup) in the morning. So it surprised me, and touched the bottom of my soul, when Frisner presented me with a holiday gift, the very best he had to offer: his music.

He taped it on the sly on a sixty-minute audiocassette, using my little gray Sony Walkman stereo recorder, the same one that disappeared a few times in Haiti and always came back on a magic carpet. He used one conga drum and played the entire thirty-five-minute set by hand, that is, no bagèt (sticks). Frisner always said that hand drumming is more relaxed than drumming with sticks. The recording does sound relaxed, with scatting and other fun kinds of riffs. Seven tracks compose the set: (1) “Papa Danbala”; (2) “Sa Ki nan Kè Mwen”; (3) two songs in kongo style (“Krisyano” and “Larenn Di Wazo”); (4) “Bawon O” in petwo style; (5) four songs in ibo style (“Ibo Lele,” “Si M Te La,” “Ibo Gran Moun O,” and “Dessalines Soti nan Nò”); (6) the lullaby “Dodo Ti Pitit Manman” along with “Rat la Fò yon Baptèm,” both in salsa style; and (7) “Pa Pale Pa Poze.” That’s a lot of music. I offer you excerpts from one song, and you can enjoy the rest when we have it up on the Frisner Augustin digital archive. 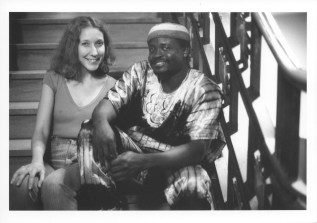 I’ll give you a taste of “Dessalines Soti nan Nò” (edited selections below). The song belongs to the Ibo nation, known in present-day Nigeria as Igbo. During revolutionary times (eighteenth century) the Ibo sustained a reputation for extreme resistance, going so far as to take their own lives to escape enslavement and foil the oppressors. This song has General Jean-Jacques Dessalines, who would go on to become first president of independent Haiti, coming out of the north bearing an Ibo charm in order to defeat a certain Jean-Pierre (any guesses as to whom?). A bouyant ibo beat inspires the breaking of bonds and drives the song. Note the playful tonal-rhythmic flourish beginning at 1:11, and the prophetic words beginning at 2:31, translated into English: “A souvenir cassette, a souvenir, even if I die, Frisner’s not dying, the cassette lives on, even if he dies, the music lives on…” He concludes with season’s greetings for the cassette’s recipient, yours truly.

Photo by Chantal Regnault of Frisner and Lois relaxing behind the scenes of a Gede festival organized by Arnold Elie of Troupe Shango, Clara Barton High School, Brooklyn, November 3, 1985

3 Responses to Tales from the Archive: Frisner’s Souvenir