Tales from the Archive: Vodou in Church

We finally got a gig with World Music Institute! Founded in 1985, WMI, in 1986, was already on its way to becoming one of the world’s leading presenters of contemporary music and dance from around the world. I had spoken with director Robert Browning about engaging Makandal months ago when WMI was in its embryonic stage, but sound level issues at an interim venue were preventing him from hiring musicians from African and African diaspora traditions—who just don’t know how to keep it down! Now, having established WMI as a non-profit, and having secured funding, Browning was using Washington Square Church in Greenwich Village as a venue. So, on February 14, 1986, Troupe Makandal was rocking every arch, tower, and cavernous hallway of the Romanesque Revival building with its Afro-Haitian vibes.

Browning had asked us to stage a Vodou dance. By 1986 Makandal had a reputation for staging what outsiders to the tradition call a “ceremony.” It took quite a bit of tailoring to shrink the all-night party for five ancestral nations to concert size, and maintain an air of authenticity at the same time. (We would compress tonight’s “ceremony” to an hour, as we shared the bill with the Cuban Puntilla y Su Nuevo Generacion.) But Makandal had become the expert compressor. Browning set one condition, however, also in the interest of authenticity: all performers had to be from Haiti. By this time, Makandal also had a reputation for including white men in the drum ensemble. Leave them out? It was a bitter pill to swallow, but swallow it we did, because even our white guys agreed that we could not refuse this one. In time, minds changed, and our white drummers played the ceremonial gigs along with the rest. 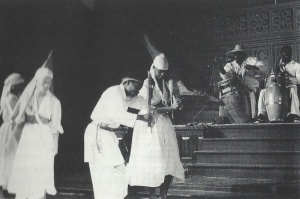 Another political counterpoint to the occasion had culminated only a week ago, when the people of Haiti finally managed to end the twenty-nine year Duvalier dictatorship. The massive struggles that Haiti has gone through since the dechoukay (uprooting) of February 7, 1986, have eclipsed the pure euphoria of those days. It was an exhilarating time of triumph and hope. When I got up to introduce Makandal to the audience, I said a few words about Vodou dances in general, and then about this one in particular. “We dedicate tonight’s dance to the spirit Ogou, the spirit of power and militancy,” I told them, “because we feel that it was Ogou who worked with the people to drive Baby Doc out of Haiti.” I got a warm round of whistles, cheers, and applause.

Frisner Augustin would put the sentiment into his own words during the performance, and you can hear what he said in the audio excerpt below. The excerpt begins with Manbo Germaine leading a song for Legba, who sits at the gateway to the spirit world. Note the booming, resonating sound of Vodou in church. The excerpt then cuts to Frisner’s bantering with the audience. First, he greeted former student John Amira and had him pour libations. Frisner used this act to comment on the power of his people and last week’s victory. Next, he challenged the ban on white drummers by calling to the stage Steve Deats, acknowledging that Steve was “another best friend, he’s a member of Makandal.”

If you enjoyed this story and would like to see Makandal continue its work digitizing and annotating the life and legacy of Master Drummer Frisner Augustin, we invite you to learn more about the work here and make a contribution to the Frisner Augustin Memorial Project. Thank you!

WMI’s flyer for the performance (second paragraph above), with photo by Chantal Regnault

Makandal channels multiple media to educate and enlighten the public about Haiti, the Haitian diaspora, and all those touched by the rich legacy of Haiti. The company's activities include research, archiving, theatrical productions, and the promotion of artists.
View all posts by makandal1758 →
This entry was posted in Tales from the Archive and tagged Archive, Drumming, Drums, Frisner Augustin, Haiti, Haitian, Haitian Music, Music, Vodou, Washington Square Church. Bookmark the permalink.

2 Responses to Tales from the Archive: Vodou in Church